On the literary trail in Somerset!

On the literary trail in Somerset!

We love books and reading.  You’ll find little book nooks all over the B&B and a plethora of genres to satisfy everyone!

2016 marks 100 years since the birth of Roald Dahl – the world’s (in my opinion) number one storyteller. Throughout 2016, there will be celebrations for Roald Dahl 100, focusing on Roald Dahl’s “gloriumptious” stories and characters and delivering a year packed with “squiggling surprises” and treats for everyone.  But did you know that prior to his writing fame, he used to sell kerosene in Shepton Mallet and the surrounding area in the 1930s?  He described the experience vividly in his autobiographical work ‘Boy: Tales of Childhood’ (published 1984):

“My kerosene motor-tanker had a tap at the back and when I rolled into Shepton Mallet or Midsomer Norton or Peasedown St John or Huish Champflower, the old girls and the young maidens would hear the roar of my motor and would come out of their cottages with jugs and buckets to buy a gallon of kerosene for their lamps and their heaters. It is fun for a young man to do that sort of thing. Nobody gets a nervous breakdown or a heart attack from selling kerosene to gentle country folk from the back of a tanker in Somerset on a fine summer’s day.” 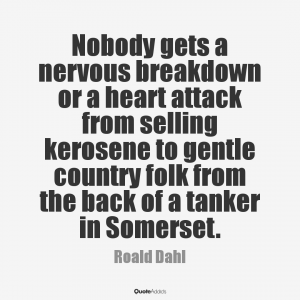 I couldn’t agree more! So this got me to thinking about other literary gems that have connections with Somerset that might just interest literary (and non-literary) buffs.  Somerset can boast an enviable wealth of literary connections!

Until JK Rowling conjured up the tale of a young wizard, Terry Pratchett was selling more books than any other living UK author. Many people do not know that when he first dreamed up the alternative universe of Discworld, Terry was working as a press officer for the Central Electricity Generating Board and living in a little cottage in Rowberrow, near Shipham.  Prior to that he had been a journalist, including at the Western Daily Press and has claimed his tales of fantasy are nothing compared to the real incidents he saw as a journalist.

No visit to Somerset would be complete without a visit to Wookey Hole Caves.  It was here that some of the underground cave scenes from Harry Potter and the Chamber of Secrets were filmed.  Definitely worth a visit!

In 1916 JRR Tolkien married Edith Bratt, and the pair were granted a brief escape from the First World War, with a seven day honeymoon beside the sea in Clevedon. This included a visit to the Cheddar Gorge which left a deep impression on the newlyweds. Tolkien was to write later that the caves provided the basis for the jewelled caverns that lay in the White Mountains behind Helm’s Deep in Rohan, which were colonised by the Dwarves of Erebor, with Gimli becoming Lord of the Glittering Caves.

The 1996 TV series of Enid Blyton’s The Famous Five, was filmed at Dunster Castle, and the Cheddar Caves. It also featured the peaceful village of Bossington, well known for its charming cottages and picturesque walk to a pebbled beach. Three perfect locations for George, Julian, Dick, Anne and Timmy the dog to find excitement and adventure. You know you feel like re-reading some Enid Blyton about now!

The village of Kilmersdon has long been associated with the nursery rhyme, Jack and Jill. The hillside behind the old tollhouse is reputedly the hill referred to in the rhyme and is now marked by a footpath leading from Ames Lane up to Kilmersdon Primary School at the end of School Lane. There are stone markers on the way up, each one depicting a line from the nursery rhyme. The restored well-head is located in the school grounds.

The BBC’s 1988 mini-series of C.S Lewis’ classic children’s story The Lion, the Witch and the Wardrobe, was filmed on the West Somerset Railway. The railway appears in episode one as the children are evacuated from London (Minehead station) to the countryside (Crowcombe Heathfield station).

Start the day at Somerset’s most spectacular ‘Jack and Jill’–style hill near Burrowbridge. Climb to the ruined church at the top, but try not to fall down!

Board a historic steam train at Bishops Lydeard station and experience the scenic journey of the children in ‘The Lion the Witch and the Wardrobe’ (and the Beatles in ‘A Hard Day’s Night’) through Crowcombe Heathfield station, alighting at Dunster.

Have a Famous Five adventure of your own by exploring Dunster Castle, with its ornate rooms, extensive gardens, resident ghost and mysterious secret passageway! Hop back on the steam train for the scenic return to Bishops Lydeard.

And if you’re looking for copies of any of the related books take a trip to Bookbarn International just outside of Bristol.  One of the largest used booksellers in the UK and every book is just £1!